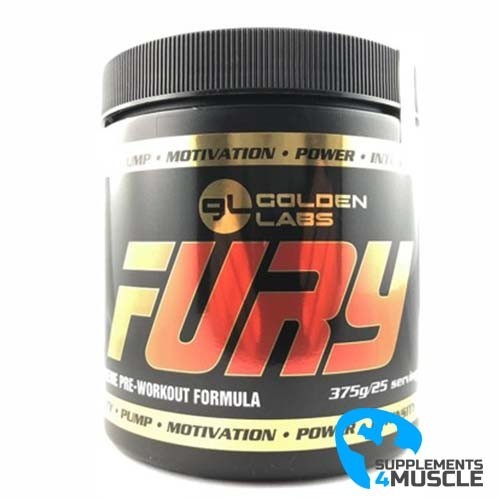 Golden Labs Fury - energy, focus and a powerful pump, what more could you want from a good booster? A mixture of micronutrients, stimulants and advanced nitrogen oxide volumes operating on various metabolic pathways, all in one supplement, causes the training to have a completely different dimension. As many as 15g of active substances per serving!

A unique pump
Unique focus
Pure energy
It complements the electorlites
There are no proprietary mixtures, everything in black and white

Citruline malate - Participates in the synthesis of nitric oxide (NO) and phosphocreatine and aerobic glucose metabolism, thereby increasing the uptake of oxygen, glucose, amino acids and creatine and energy production through muscle cells. It reduces the concentration of lactic acid and ammonia in the muscles, allowing the body to recover energy faster by increasing the level of creatine phosphate and resynthesis ATP. Citrulline malate is a much more effective form than high doses of arginine, as it is its precursor. At the same dose as arginine is more effective in increasing its amount in the body than arginine alone.

L-Taurine - an amino acid whose particularly high concentrations are noted in highly developing organisms. Affects cognitive abilities, it is often recommended as an effective form of support for learners. It improves mental functions, it also has a positive effect on the mood. The effectiveness of taurine in this field is so important that it is recommended as one of the means to eliminate discomfort caused by excessive alcohol consumption.
Increased supply of taurine also promotes an efficient energy management of the body. This amino acid acts as a creatine transporter, which stimulates the acquisition of energy from phosphagen, a mechanism that prevails during strength, interval and sprint training.

L-Tyrosine - a broad-spectrum amino acid that results from its role as a precursor of many biologically active substances. The stimulating effect is due to the presence of adrenaline and noradrenaline on the pathway. Increasing the supply of substrate for their production promotes their synthesis, directing the body to a state of increased physical fitness.
Tyrosine is also a precursor of dopamine, which in two ways affects the body's ability. First, it is responsible for correct neuromotor coordination, allowing to maintain high quality of traffic. Second, it is present in the so-called motivation center, promotes positive emotional states, can increase cognitive ability.
In addition, tyrosine is present in the synthesis pathway of thyroxine and triiodothyronine, hormones produced by the thyroid gland. Their secretion is associated with an increased rate of metabolism.

L-arginine - The most well-known property of arginine is the synthesis of nitric oxide - a substance that dilates blood vessels. Thus, arginine contributes to a more efficient and faster transport of nutrients and oxygen to working cells, as well as the discharge of toxic metabolic compounds, inhibiting metabolic processes.

Suggested use: To check the tolerance of the body`s Fury dosing should start from the mixing 1/2 scoop of Fury with 8-10 oz. of water and drink it 30 minutes before exercise. If you need even higher doses of energy, consume 1 scoop with 8-10 oz. of water 30 minutes before exercise. Use of more than one scoop is not recommended due to the extremely high potential of Fury. To maintain maximum benefits from the using of Fury, is recommended to use Fury no more than 8-10 weeks. Then you should do a minimum 8 weeks off from further use of Fury.