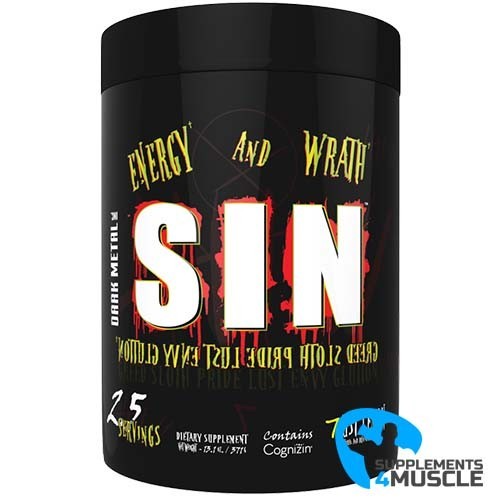 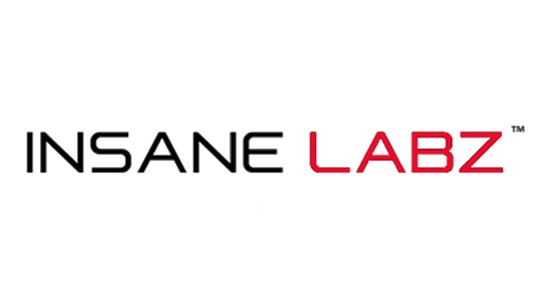 Dark metal Inc SIN is a new pre-work from the Insane stables. The product relieves the feeling of tiredness and increases drastic strength thanks to the innovative testosterone-raising composition.
Stimulation is on a very high level, thanks to a proprietary blend of the producer - AMPiberry® (Juniperus Communis) known among others in products such as Psychotic or Manson.
If you want to increase the effectiveness of training and you need a huge dose of energy and stimulation Dark Metal Sin is a supplement perfectly created for you. Undoubtedly, the advantage of the product is high quality, maximum concentrated ingredients and speed of action, which causes the muscle pump and the training becomes by far better. The combination of concentrated doses of creatine, beta alanine and agmatine, for example, will make your strength and performance increase and your socks after training will not be so annoying. The addition of betaine reduces the level of homocysteine, which is a toxic substance produced in people whose diet is based on large amounts of meat. 500 mg of citicoline increases the levels of norepinephrine and dopamine in the brain, accelerates metabolism, eliminates the feeling of fatigue and improves concentration.

Creatine monohydrate - is one of the most popular and commonly used creatine forms in the world. The process of creatine synthesis in our body is tedious and long-lasting because the use of this ingredient in SIN dark metal allows you to deliver the compound in a ready form to the body. Creatine Monohydrate also has anti-catabolic activity in addition to its anabolic effect. A high dose of 5 mg increases muscle strength and increases the efficiency and intensity of training by increasing the amount of ATP. Another benefit is the stimulation of protein synthesis which leads to lean muscle mass and this is especially important for athletes. Creatine supplementation also reduces muscle acidification after intensive training.

Beta Alanine - is an amino acid naturally found in muscles, which acts as a buffering agent, delaying the production of lactic acid. There have been many studies on the effectiveness and sense of beta supplemental alanine and in each case demonstrated a real effect on improving the results achieved by athletes (different disciplines). In addition, longer supplementation contributes to better regeneration after exercise and lowering the level of body fat

Betaine anhydrous - (N, N, N-trimethylglycine, TMG) ​​is a chemical compound that is derived from the amino acid glycine. It occurs in the body naturally fulfilling many important physiological functions. It is necessary for the synthesis of some proteins and choline and adrenaline. Betaine plays the role of osmoregulator so it is responsible for maintaining the proper concentration of bodily fluids in the body. Scientific research on this substance convinces about its beneficial effects on the cardiovascular system. Betaine effectively reduces the level of homocysteine ​​in the blood, which is a toxic substance. The high dose of 1.5g is intended for athletes who want to increase muscle mass and strength. Betaine plays an important role in the biosynthesis of creatine, which is crucial for the strength and endurance of muscle tissue.

Agmatine - is characterized by a very wide spectrum of activity. The main action of the substance is stimulation of the body and enhancement of the muscle pump. The compound stimulates the synthesis of nitric oxide (NO2), and thus improving the blood supply and nutrition of muscle cells. It eliminates the pain of neuropathic origin and supports cognitive processes. Agmatine enjoys great popularity among athletes, because it allows you to improve performance, strength and endurance. The substance increases blood flow, supporting the process of "cleansing" of working muscles. In each cell there is a specific exchange of oxygen and nutrients for carbon dioxide and harmful metabolic products that the body has to remove, and due to the increased blood flow, such exchange occurs faster so that the cells of the muscle tissue can work longer and more efficiently. Arterial blood contains essential muscle oxygen and provides nutrients such as amino acids, sugars, creatine, arginine. Thanks to the action of nitric oxide, the transport of the body is more efficient, which causes that the cells are better nourished and the transformation products are expelled faster from the body.

Cisidyl-5'-diphospholine - also called citicoline. It is a compound that occurs naturally in the human body. Taken in the form of a supplement, it has a very good solubility in water and its absorbability is even above 95%, much higher than choline bitartrate. It has a strong, positive effect on the nervous system, which is why it was referred to as "Viagra for the brain". CDP-choline belongs to nootropic substances - it improves cognitive functions. It is a precursor to the synthesis of acetylcholine, one of the key excitatory neurotransmitters. In addition, it has a stimulating effect on the central nervous system, increasing the energy level. Choline activates neurotransmitters, increasing noradrenaline, dopamine and brain metabolism.

Anhydrous caffeine - is an anhydrous form of caffeine from the group of organic compounds. It blocks the adenosine receptors in the brain, which results in eliminating the feeling of tiredness during training. Due to its thermogenic action, it effectively burns fat and improves metabolism.

AMPiberry® - a reserved name of sunbtance developed on the basis of the Juniperus communis L. fruit extract, an evergreen tree of the Cupressaceae family that grows abundantly around the globe with a cooler climate. A very strong stimulant, which is now the showcase of the entire Insane line. The mixture is intended only for advanced users who expect without compromise stimulation. Due to antioxidant properties and increasing concentrations of superoxide dismutase, catalase and glutathione peroxidase, it has anti-apoptotic activity in the nervous system. It reduces inflammation and reduces the feeling of pain, including the headache. By interfering with neuronal excitability, it reduces the feeling of tiredness and discouragement, motivating the body to continue working. It shows the synergy of action with caffeine.

Dimethylaminoethanol (DMAE) - is an organic compound belonging to the group of amino alcohols, or else hydroxyamines. DMAE is a precursor of acetylcholine in the central nervous system, so it belongs to nootropic compounds. Scientific research proves that the substance positively affects the functioning of the brain. The compound is also characterized by a strong antioxidant effect. Dimethylaminoethanol is a compound that is particularly recommended for people exposed to stress, working mentally as well as athletes who lead an active lifestyle. It has been proven that acetylcholine is a neurotransmitter that improves the functioning of brain structures that are responsible for memory and concentration. The source of DMAE is mainly in seafood and fish such as salmon or sardines.

Huperzine - is an alkaloid of plant origin, isolated from a plant of the genus Huperzia serrata, widely used in Asian countries. The substance indirectly influences the activation of nicotinic receptors, which increases the strength of muscle contraction. As a result, the training is easier and more effective. Scientific research proves that regular consumption of this compound promotes an increase in acetylcholine concentration. Supplementation has a positive effect on memory improvement, effective absorption of knowledge and increases the ability to concentrate. It has been proven that this alkaloid compared to other substances is able to more effectively exceed the blood-brain barrier and is characterized by a much higher bioavailability. As a result, it is one of the most effective substances increasing the activity of acetylcholine in the central nervous system.

Blamus TM - Extract from a plant originating from the forests of Asia Curculigo orchioides also known as Black Musli, for centuries used as an aphrodisiac and antioxidant. It has a protective effect on the liver and has anticancer effects. Modern scientific research shows that the plant effectively increases testosterone levels which contributes to the rapid growth of muscle mass. Another benefit of using this plant is to increase potency in both men and women. Studies show that in the case of men, the plant increases the amount and quality of sperm.

DHEA (dehydroepiandrosterone) - in the human body is a natural steroid hormone produced by the adrenal layer of the adrenal cortex from cholesterol. Due to its similarity to testosterone, it is easily converted to the hormone desired by men. It is believed that its production reaches a peak of about 35 years of age, and then falls, reaching trace amounts in the elderly. It has been observed that people suffering from cardiovascular disease, cancer, diabetes, osteoporosis and depression have a lowering of DHEA production.

Summary - SIN seems to be the top offer on the market of pre-workout supplements offered on the market. Thanks to the combination of high doses of agmatine, a hardcore stimulant mix, a bladder boosting Testosterone (Blamus and DHEA), the supplement is a great proposition for high-flying athletes. Thanks to the innovative composition, you can get ready for your life trainings and next records.

Directions for use: As a dietary supplement for adults, take 1 serving in 8-10 oz of water once daily. Never consume more than 1 serving in a 24 hour period. Do not take within 4 hour of bedtime. Read warnings and only take as directed.